Skip to content
On Monday, December, 12th, over 800 organizations and many more individuals raised their voices to establish universal health coverage (UHC) for all. InciSioN (The International Student Surgical Network), one of the partners of the UHC Coalition, encouraged its national small working groups to organize local events for Universal Health Coverage Day with a special focus on Global Surgery. (1)
<Zineb Bentounsi>

Four national small working groups (being Egypt, Morocco, Rwanda and Tanzania) organized local events, being countries where “health for all” is an urgent need, and not just a concept.
In Egypt, Morocco and Tanzania, medical students gathered and brainstormed trying to answer the questions “how can we achieve UHC in our country?” and “how do we avoid that anybody is pushed (further) into poverty for needing surgical care?”. At the end of their meeting, each group wrote a statement with their suggestions. Each group had different suggestions based on their own context, but some suggestions were common.

These three groups urged their government to increase the budget allocated to health and Tanzanian students further highlighted that “there must be a well-defined amount of money” dedicated only to surgical care. Another cornerstone was taxes, with Moroccans and Egyptians both suggesting to lower taxes on medications and health care equipments (especially surgical equipment) and push their governments to start manufacturing that equipment locally, instead of importing them (thus investing in technology and engineering as well). 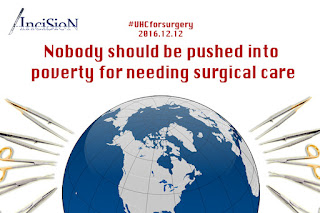 Egypt and Tanzania also believe that everyone should have access to emergency surgeries regardless of their ability to pay. To achieve this goal, Egypt suggested to establish a fund (financed by taxes proportionally deducted from incomes) to cover those surgeries, while Tanzania thinks that missionaries should focus on settling in low-income areas, providing emergency surgeries to those populations.

Furthermore, some suggestions were adapted to the country’s context. For Moroccan medical students, a health insurance policy to cover every Moroccan should be a priority [Note: there are several public and private health insurance policies in Morocco depending on income, but no standard registration]. For Tanzania, it seems important to include basic surgical care in primary health care in order to “lower the workload” in referral hospitals. Lastly, Egypt mentions the health workforce in their declaration, asking for improvement of the status of healthcare professionals.

On the other hand, the students from Rwanda did something completely different, by choosing to tell the story of a patient who needs surgery because of a road accident, yet can’t afford to pay for it. Reading the story gives you an insight into Rwanda’s health care system and its efforts to reach UHC. To read the story, please find the link as follows: https://m.facebook.com/story.php?story_fbid=1808107899404362&substory_index=0&id=1737737036441449

InciSioN would like to thank each group for organizing and sharing their activity. Special thanks to Nermin Badwi from Egypt, Godfrey Sama and Faith V. from Tanzania, François Xavier Rutayisire, Theogene Sengarambe and Iraguha Bandora Yves from Rwanda, the executive boards of Medec’IN-Casa in Morocco and ZMSSA in Egypt. (2,3)